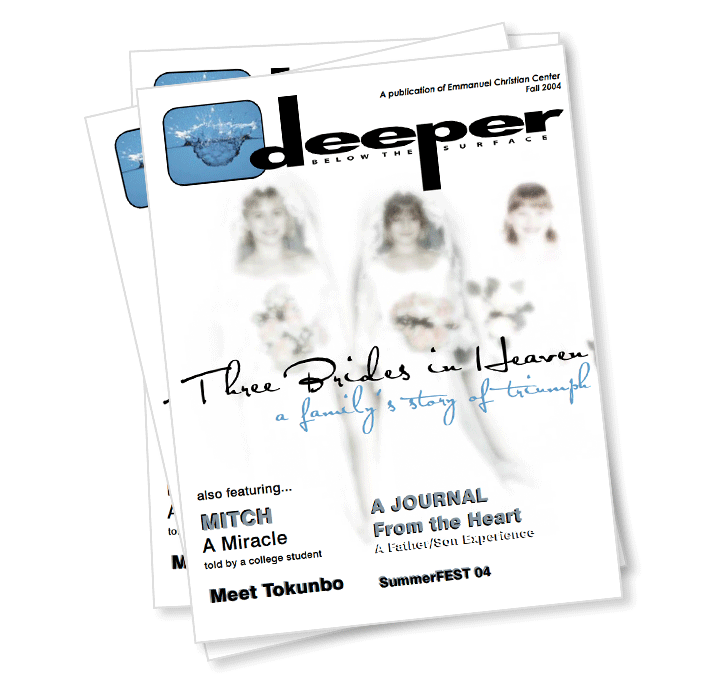 A family’s story of triumph…written by Angie Halama

The headline in the Star Tribune on January 2, 2004, said, “Three Sisters Killed in Car Crash.” The story reported that on New Year’s Day the Mayer sisters—19-year-old Krista, 17-year-old Nikki, and 12-year-old Jessica—were on their way to Willmar. They were going to a bridal party celebration for their brother’s fiancé two days before the couple’s wedding. The three were riding together in the same car, and, while making a legal pass, they hit a minivan head-on. Nikki, the driver, and Jessica, died at the scene. Krista died at the hospital.

Originally published in the Fall ’04 issue of  “Deeper” – A publication from Emmanual Christian Center in Spring Lake Park, MN

After the Crash – Grieving With Hope in Light of Eternity

Most parents die before their children, but Debbie lost her three daughters in a car accident just two days before her son’s wedding that they were excited to be bridesmaids in. She shares with transparency and honesty the heartache, struggle, and victories, along her journey of grief. You will hear how no sorrow, loss, or disappointment can separate you from God’s great love in her inspirational book “After the Crash – Grieving With Hope in Light of Eternity”.

Gain an eternal perspective for your journey as you read Debbie’s Monthly Perspectives and Blog.
She shares from her heart insights and lessons learned along the way.

March Perspective | What Are You Living For?

In 2002 I went on a mission's trip to New York City with my son Joey and two daughters, Krista and Nikki, along with our Church Youth Group.

It’s that time of year that you’re either planning a warm, sunny vacation, enjoying one, or dreaming about one. Unfortunately, I’m in the last category. Seriously though, the

Blessed are the Poor in Spirit

Has anyone ever told you how amazing or strong you are? Inside, you're laughing (or maybe crying), because you know how just the opposite is true? You remember

December Perspective | The Wonders of His Love

"Show me the wonders of Your great Love, You who save by Your right hand those who take refuge in you" (Ps. 17:7). Joy to the world is

One Saturday morning, at the beginning of our grief journey, Joe and I sat on a sunny patio of a nearby coffee shop. With latte in hand, we

What makes you explode with praise? Do the bold and brilliant hues of the sun descending on the horizon or the magic of a thriving bed of

“And for us this is the end of all stories. And we can most truly say that they lived happily ever after. But for them it was only the beginning of the real story. All their life in this world and all their adventures in Narnia had only been the cover and the title page: now at last they were beginning chapter one of the Great Story which no one on earth has read which goes on forever: in which every chapter is better than the one before.”